Objective: The lipids are key molecules involved in various signaling pathways of the pathophysiology of diabetes mellitus. To explore the therapeutic potential of these pathways and to suggest the potential targets for intervention in diabetic nephropathy, we conducted the retrospective lipidomics profiling of diabetic and diabetic nephropathy phenotype.

Methods: We used the reverse phase Liquid Chromatography Coupled Mass Spectrometry (LC-MS) method in the negative ionization mode. The diabetic nephropathy (n=10) and Diabetes mellitus (10) were included in the study. The extraction of features was done using “XCMS” package in R. The Bayesian regularized t-test was performed using Cyber-T online tool to identify the significant lipid molecules. The differential density distributions of lipids for two groups were studied using “sm” package in R.

Results: The fold change analysis of lipid molecules present in exosomes suggests a significant enrichment of glycerol lipids, which could be involved in phospholipid and sphingolipid pathways. The hypothesis testing of similarity of diabetic nephropathy and diabetes mellitus phenotypes using the regularized Bayesian t-test showed 238 analytical peaks as significant with a p-value less than 0.05. There was no association between fold change and significance found. The density plots of PC, lyso-PC, PIP2, DG, and GM3 lipid showed significant difference in the diabetic nephropathy and diabetes mellitus groups by using bootstrap re-sampling method of hypothesis testing. The involvement of phospholipase C and phospholipase A2 was suggested in the patho-physiology of diabetic nephropathy. 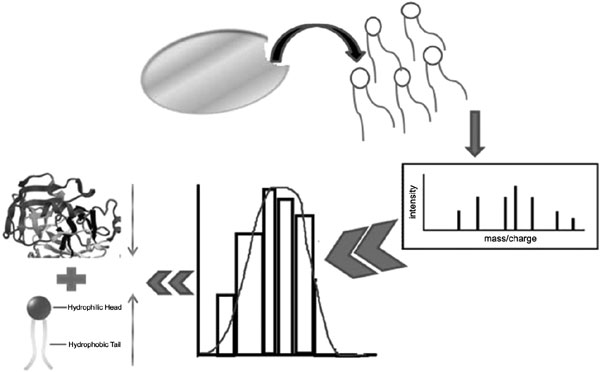