Nine samples of propolis from different parts of the UK were extracted and profiled by high resolution LC-MS. The data were aligned and features were extracted into 0.02 amu windows. The profiles contained thousands of features. In order to establish a platform for comparison of the samples the top 125 features by average peak intensity across the samples, after excluding abundant dimer peaks, were selected for further characterisation by MS2. Of the top 125 features around 90% of the peaks could be assigned an identity with some degree of confidence. Only ca 50% of these putatively identified compounds had been reported in propolis before. The compounds fell into a few major categories: flavonoid esters and possibly some flavonoid ethers, phenyl propanoid esters, glycerol esters, flavonoid glycosides and hydroxylated fatty acids. Pinobanksin was the most abundant compound by average response across nine samples. The flavonoids pinocembrin, pinobanksin, galangin and chrysin showed a relatively low degree of variation across the samples whereas some compounds such as flavonoid esters and glycerol esters were much more variable in their abundance. The role of propolis in preventing infections in the bee hive has yet to be established but the approach taken in this paper provides a potential method for trying to correlate hive health with the composition of the propolis gathered by the hive if suitable metadata were collected. 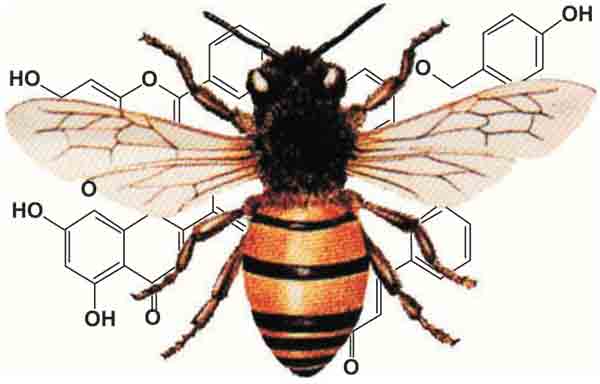